On Friday 8 December 2017, the French International School of Hong Kong (FIS) officially unveiled an enormous reproduction of celebrated Hong Kong artist Almond Chu’s “Mother of Water” at its new Tseung Kwan O campus. The 20m x 10m reproduction hangs on the eastern facade of the campus for the Tseung Kwan O community and its visitors to enjoy.

“The value of art and creativity is recognised in cultures across the globe. This project was conceived to highlight the relationship between France and Hong Kong; a bridge between two cultures. A French school which is part of the Hong Kong community displaying the work of a celebrated Hong Kong artist for a wider public of all nationalities to appreciate and enjoy,” said the Consul General of France in Hong Kong and Macau, Mr Eric Berti, to the assembled guests.

The project itself was made possible thanks to the support of great art collectors and philanthropists for art and education, Mr. and Mrs. Robert W. Miller who are delighted to be part of such a creative initiative to share art at the heart of FIS and around Tseung Kwan O.  La Galerie Hong Kong selected the work of 4 different artists from which Mr and Mrs Robert W. Miller chose Almond Chu’s “Mother of Water”. ‘Presenting one of the oldest living creatures on Earth in “Mother of Water”, the artwork is created to share a message of optimism and love of life’ explained Almond Chu.

FIS encourages every student to express their imagination, individuality and innovation. It is a school which is full of life and creativity, constantly finding new ways to make art accessible to all. The new Tseung Kwan O campus will play an active role in the community and will become a focal point for artistic and cultural projects. Sharing Almond Chu’s fabulous artwork underlines this intention while demonstrating that art is accessible to everybody and can be appreciated by all ages and cultures. “We are here today to celebrate the first steps on our journey to becoming a creative, cultural hub for all,” shared Yves Bernard, President of the FIS Board.

As a community conscious school that actively promotes sustainable development, FIS is an eco-school, considering sustainability whenever possible. With this in mind, FIS intends to ensure that this enormous reproduction of “Mother of Water” will eventually be recycled into bags – limited edition eco-chic pieces offering their owners the chance to bag a piece of history too. These items will be available to pre-order as auction lots on offer for the FIS Gala on 2 March 2018.

Recognition of art as an important contributor to students’ education is also a focus for the AEFE* for this 2017-2018 school year. AEFE believes in students following an artistic and cultural journey which brings artistic creativity to the forefront by linking it to education and increasing awareness among the young. This is perfectly exemplified by the role FIS is playing here in Hong Kong to shine a light on art.

* The Agency for French Education Abroad (AEFE - Agence pour l’enseignement français à l’étranger) is tasked with providing an education for French children abroad as well as promoting the French language and culture overseas. This unique network spreads across 137 countries and comprises almost 500 schools with more than 342,000 students. FIS is the only accredited French school in Hong Kong under the AEFE convention. 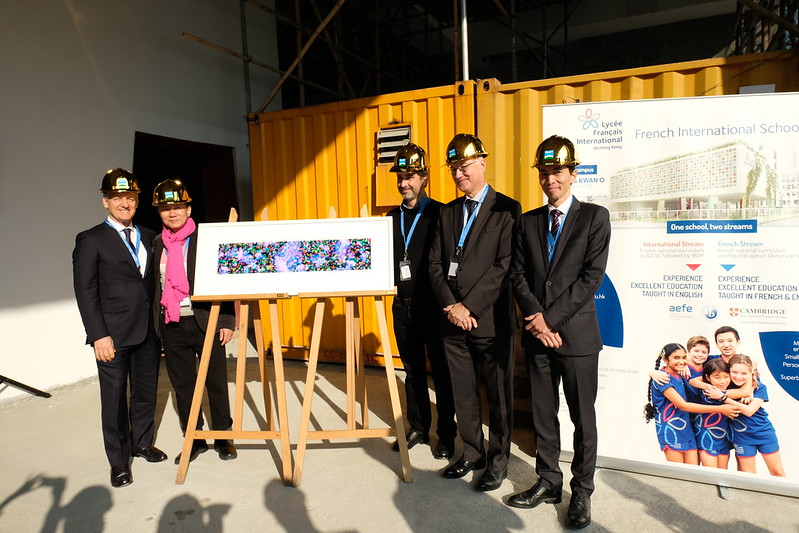