On Friday 14 December, the staff, children and parents from CM1, CM2, Y5 and Y6 headed to the TKO running track dressed in some crazy costumes for the annual Sunbeam Fun Run.

A terrific day was had by all. What a great reason to bring all three sections of the school together in the spirit of fun, fitness and philanthropy!

Click on the below image to see more photos: 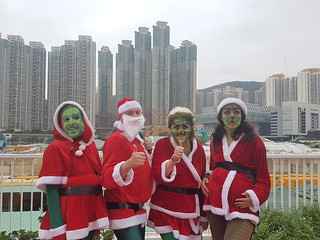 It was a vivid day on the 14 of December and everyone was in high spirits. We were going to run at the TKO campus to raise money for the Sunbeam Children's Foundation. We were already organised into teams; the only tasks left for us to do was to get there on time. The bus from Jardine's to TKO was full noise, chatter and a grin was spread on everyone's faces.

We arrived and soon we were on the track waiting for the starting whistle. "Beeeep!". And we were off!

After every lap our hearts were racing at the speed of a cheetah. We felt like dying but none of us stopped: it was all for a good cause.

Time flashed by and the next second, our sweaty bodies sat in the TKO auditorium where Mr Durkin gave a few words to congratulate everyone and tell us a bit about Sunbeam and the children who would benefit from our hard work. It was truly a fantastic athletic day.